Two years ago, after the roads were re-opened, we drove home through a valley burned by a devastating fire.

The formerly lush green landscape consisted of ash and blackened tree trunks at the time. It looked and smelled like death – the death of a forest, the destruction of homes, and the loss of wildlife. 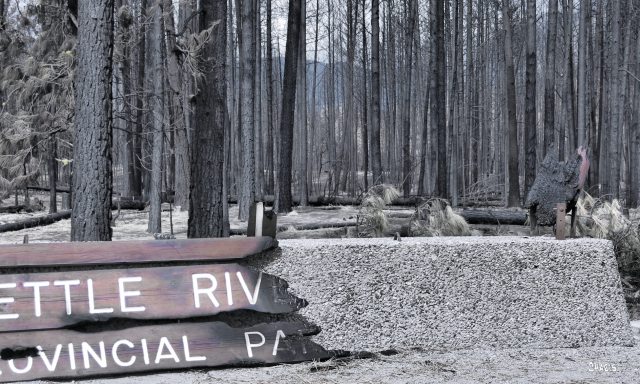 This week we passed through the same valley. In the place where ash and charred debris once covered the forest floor, wild flowers and green grass sprang up in an unrestrained chorus of colour under the old black stumps.

Children in the campground squealed with delight when their moms said they could play in the cool water on the river’s edge. The smoke smelled like sweet barbeque sauce this time.

Five years ago a microburst wind downed hundreds of trees in our area. Century-old fir trees leaned on telephone wires. Giant blue spruce snapped like twigs, crushing cars and houses and garages as they fell. It was a disaster at the time. I mourned over the loss of our big shade tree. It used to cover nearly half the backyard and was a perfect place for tea parties and splash pool swimming with the little ones. When the trunk split in the wind and the tree tipped precariously over the garden we had no choice but to cut it down.

Today, if you wander around town, there are few signs of the storm that ravaged our neighbourhood that day. Roofs have been repaired and trees replanted. I now have two May trees springing up from the healthy root system the old tree left. 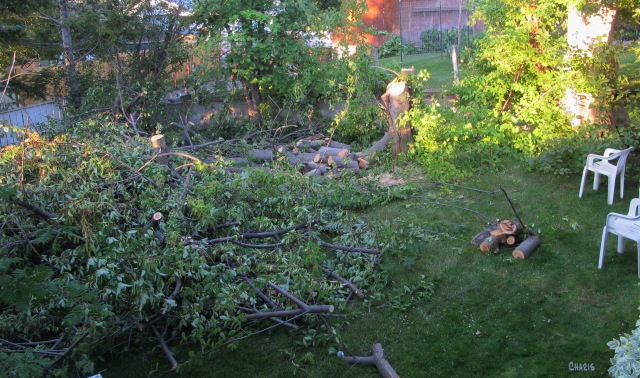 Sometimes after a devastating loss, we feel like things will never be the same, and the truth is, they are not.

But things would have changed had the disaster not occurred, just more gradually. When people visit a town after moving away the first thing they notice is all the changes. There’s a parking lot where the hardware shop used to be and the public works department cut down the big willow down by the park because its roots were getting into someone’s plumbing. But there’s a new wing on the hospital now – and a new recreational climbing facility by the soccer fields. We’ve adjusted. They haven’t.

People lived through both disasters (and a few more I haven’t mentioned). It could have been a lot worse. It was not the end of the world. We felt relieved that we had survived, then came the clean-up and labour-intensive rebuilding. Work crews restrung power lines, tromped through broken homes, cleared trails and rebuilt bridges for months.

Sometimes loss clears the way for something new, something different or even something better. When an old forest burns, it opens up the forest floor to light where seeds, long dormant, can grow again. When my big shade tree came down I had more light so I planted a vegetable garden. We ate some of the tomatoes today.

I was thinking about unwanted change as I looked at photos I took in the fireweed- covered Kettle Valley last week.

I had good news and bad news after specialized medical scans in Kelowna (which was the purpose of our trip.) The good news is that although there is more than one tumour they are in the same area and the doctor thinks the cancer can be treated with surgery alone. It has not spread to major organs! It is treatable! Thank you, Lord! This is not the worst case scenario. This is one of the better scenarios!

I felt so relieved and grateful that it took a couple of days to realize, hey, wait a minute… The good news is that I get a free complimentary appendectomy with the removal of parts of my body I’ve thus far been rather attached to. Removing this bit means that bit and that bit won’t have adequate blood supply anymore, so they have to go too. That doesn’t feel like good news today. This will be the third “…ectomy” this year. It feels like autopsy by installment. It’s like being rescued from a burning building or yanked out of your car before a falling tree smashes it like a coke can. It’s a much better than the alternative, but still, when the dust settles, something hurts.

Don’t get me wrong. I am very grateful that the outcome of the tests was not as bad as feared. But can I admit I’m tired of loss? I’m tired of the work of restoration. Our house has still not been repaired after the flood in March. I don’t want to take more time to recuperate. I’m finally able to get out for a walk in the woods after two surgeries earlier this year.

God is still working on my heart. I whine, then I realize that if I want Jesus’ promised peace that passes understanding I need to give him my right to understand.

I look at our restored city with streets lined with young trees and rain bouncing off sturdy new roofs. I see the ash in the valley replaced with wild flowers and horses and cattle grazing in the newly fenced fields. I see tomatoes and beans and peas growing in my backyard where there was too little sun to grow before. I see change that came about in a way nobody wanted but they appreciate now. There is joy in the journey.

Again, I have to say, Lord, help me to see from your perspective. I’m going to keep asking for total healing, but I choose to co-operate with you, however you want to do this. I would rather have an instantaneous healing miracle but if surgery is the way you are going, well okay. Let’s do it. I am thankful for physicians with skills. Because you have shown me over and over again that the gold lies on the other side of the valley of shadow, because letting go of my own plans allows your brilliant purpose to shine in dark places, because you have kept your promises and always been faithful (even when it didn’t look like it at the time). I trust you. You give love, joy, and peace. I know you will provide everything I need when I need it.

It’s not the end of the world, but even if it were, you would still be there with your arms open wide.

You point the way to limitless possibilities.

And thank you for fireweed. It’s beautiful.

4 thoughts on “It’s Not the End of the World”