When I was a child we received official government pamphlets in the mail that frightened me. They showed red circles, like ripples, over a map of a city. The closer you lived to the center of the circles the more likely you would die from the inevitable nuclear holocaust about to be dropped on our northern Canadian city.

“It’s because of the oil and pipelines,” I heard the adults say. “They make us a target.”

I remember what it was like to be raised in an atmosphere of fear by a generation scarred by memories of WWII and The Depression. I was a powerless child who felt responsible for stopping the bomb. I was part of the generation who could not trust authority because, after all, it was “the good guys” who dropped the bomb the first time. There was no hope for the world. As young adults we sought escape in self-indulgent sexual activity and recreational drugs. We questioned the wisdom of bringing children into such a world.

The great world-ending event never happened in my parent’s lifetime — not that it couldn’t have happened, but it didn’t. Thus far it has not happened in mine, nor in my adult children’s. In fact, we enjoy a higher standard of living than my parents or grandparents did.

When I read about the history of various faith movements that went off the rails after a generation or two, the same factors keep showing up: the exploitation of power, and fear of the end of the world — situations where people cast aside discernment and agreed to rash actions because of the “extenuating circumstances.”

This morning I read a poll asking for people’s reactions to the impending end of the world due to climate change and the carbon mess my admittedly self-focussed generation brought down upon our heads. The poll gave these options. Essentially they were:

1) We will soon be doomed.  2) We’re doomed now.  3) Maybe the people who created the problem could be trusted to fix it? 4) Never mind. We’re doomed.

I listen to my grandchildren who tell me, with desperation in their voices, that their teachers say the world will end in twelve years because of carbon emissions and plastic pollution. A young friend talked about the “immorality” of giving birth to another generation born to certain death.

I recognize the same net that held me captive for so many years: fear.

If we fail to consult the Creator, who understands his creation much better than we do, we are left feeling like the helpless children of the sixties reading the red circle pamphlets. They were burdened with responsibility without authority. When we try to solve the problem all by ourselves, we are like shepherd-less sheep each wandering off right into the danger we fear most. Our debriefing sessions, if we live long enough to schedule them, include the phrase, “It seemed like a good idea at the time.”

Fear and hopelessness were the weapons the enemy of my soul used to manipulate my actions and willingness to surrender power for most of my life. I see him tripping up this generation in the same way. Fear manipulates their thinking to the point where many see no future for themselves or the children they will not allow to be born – even if those children, like many generations before them, carry solutions their parents could not envision.

The Good Shepherd has resources the sheep do not have. He is willing to put himself between them and the predator. He is willing to venture into the wilderness to save the one who foolishly got him/herself into a terrible mess of brambles. Like the shepherd on horseback I saw on the Cowboy Trail last week, he is near — and he is good.

Psalm 23 was written by a King, and former shepherd, who found himself in a terrible mess of his own making. He recognizes another option to the trajectory his foolishness started: 5) Turn to God and trust in his ways.

The Lord is my best friend and my shepherd.
I always have more than enough.

He offers a resting place for me in his luxurious love.
His tracks take me to an oasis of peace, the quiet brook of bliss.

That’s where he restores and revives my life.
He opens before me pathways to God’s pleasure
and leads me along in his footsteps of righteousness
so that I can bring honor to his name….

…So why would I fear the future?
For your goodness and love pursue me all the days of my life…

I checked the weather report before I left to drive to Calgary. Mixed cloud and sun with occasional showers. Perfect.

I like driving the Cowboy Trail when the weather is unsettled. The road runs north on the east side of the Rocky Mountains from the Crowsnest Pass. Light constantly changes in these conditions. Vistas are never quite the same. Cloudscapes and sunbeams arrange patterns of shadow and sun on the hills, telling a different story with every shift of wind. The photographer waits, anticipating drama – a story told in darkness and light.

As part of my continuing story, this trip involved another trek to see specialists in a larger center about my complex health challenges. It’s one of those battles raging between good days and bad days, like plot shifts set in an ever changing landscape of unexpected symptoms.

I thought about the elements of story (a long road with few services leaves ample time for thought.) Even my little granddaughter had it figured out by the age of four.

“Every story has to have a good guy and a problem,” she said, drawing an exceptionally long-limbed princess on the first page of a storybook we decided to create one rainy afternoon. “Sometimes it has a bad guy, but it doesn’t have to. You can make a story without a bad guy, but you can’t make a story without a problem. Now what is our problem going to be? Maybe the princess has nobody to play with?”

A fellow writer had this to say about a memoire she was asked to review: “I’m happy for the writer. She’s had such a lovely life, but I feared falling into a never-ending sleep of the mostly dead before reaching the final chapter. Nothing out of the ordinary ever happened to her – no disasters, no life-or-death crisis, no betrayal, no wayward children, not even a single regret worthy of a flight to a priest in another town for a trembling ten minute confession. I’ve had a hellish life myself. I wouldn’t wish it on anyone, but at least it wasn’t boring. I can’t relate to this book. What should I say? Reviewer dies from toxic dose of niceness?”

Jesus understood the power of story. “It’s like this,” he said, communicating a complicated concept people by referencing something familiar.

“It’s like a Father who had two sons, but the youngest one…”

“It’s like a rich man who went on a journey and trusted a manager to look after his business while he was gone, but…”

I watched the clouds along the highway and hoped for a place to stop where the views were best. A couple of times the clouds dropped their loads and the rain was so heavy I had to pull over to the side and wait them out. My windshield wipers couldn’t keep up. I could see nothing. But stories are like that too, especially our own, especially in the middle of a you’ve-got-to-be-kidding downpour.

It’s hard, on the underside of a deluge, to remember that God is in the story with us. In fact, he has gone to some lengths to arrange circumstances that will give us stories.

Everything we think we know about him is merely theory until we experience him in the storm. Everything is dull until we see the light flooding the plain with hope. Every seed is dormant until awakened by the rain.

I could pray for a nice life without stress, without doubt, without the need for divine intervention.

I could, and I have, but one night, in a dream, the Lover of my soul came to my door and called my name. When I opened to it, I saw him astride a beautiful white horse. He held the reins of a saddled bay and said, ”Come on! I want to show you something.”

We’re still writing our story together. It’s been an adventure, even when the skies have been cloudy all day, because, well, when that sun breaks through, it’s glorious.

“I have told you these things, so that in me you may have peace. In this world you will have trouble. But take heart! I have overcome the world.”– Jesus
(John 16:33 NIV) 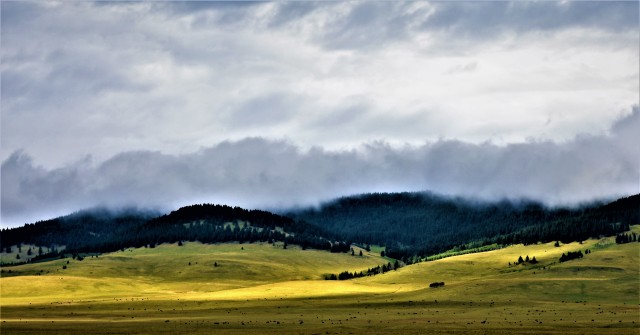