Perfect, absolute peace surrounds those
whose imaginations are consumed with you;
they confidently trust in you.

Imagination is a powerful tool God gave us, but it can lead us down dark paths when it presumes the worst, or paths of peace and joy when we remember the One in whom we place our trust.

Many of us know what it is to suffer the agony of scenarios that play out nowhere but in our minds. What if? is a game that can be played in two minds, the old wounded mind or in the forgiven mind Christ is renewing, one hedged in by terrifying fear of abandonment and one lifted up by confident security of being loved by the Creator of the universe.

Check your surroundings. Where is your imagination running? It might be a good time to redirect your thoughts and enjoy the peace it brings.

The Jewish celebration of Purim starts at sundown this evening. Purim marks the story told in the book of Esther when the Jewish people were saved from the intentions of an evil royal advisor named Haman. He was hung on the gallows he prepared for someone else.
This morning this passage from the Psalms came up in my reading for the day. In it the psalmist David, who has been harassed endlessly by those who were out to kill him. King Saul was motivated, as was Haman, by jealousy.

“‘We have devised the perfect plan!’
Yes, the human heart and mind are cunning.
But God himself will shoot them with his arrows,
suddenly striking them down.
Their own tongues will ruin them,
and all who see them will shake their heads in scorn.
Then everyone will be afraid;
they will proclaim the mighty acts of God
and realize all the amazing things he does.
The godly will rejoice in the LORD
and find shelter in him.
And those who do what is right
will praise him.”
(Psalm 64:4-10 NIV)

This was written generations before the time of Esther and thousands of years before our own time. I do believe that God, in his goodness, sometimes says, “Time’s up!” and moves to protect the innocent. Are we in such a time?
Esther’s story has become important to me since receiving a dramatic dream. I wrote about it here. I think it’s time for a re-blog.

Yesterday I heard a friend talk about Esther. He reminded us of the preparation she went through to bring her to a unique position of influence. I’ve been fascinated by the life of the orphan queen ever since I had a dream involving Esther.

The story is told in the Bible of a young parent-less Jewish woman, adopted by her cousin, who rose from obscurity to the position of queen in the land where her people lived in exile. She dared to defy protocol and approached the king in the throne room without first having been summoned by him. As her cousin, Mordecai, reasoned, it looked like God arranged for her to be there to help her people in a time of crisis. It’s great story, the kind that is made into Hollywood movies. But, if you take time to read it, you will notice that the story is not…

Honor me by trusting in me in your day of trouble.
Cry aloud to me, and I will be there to rescue you.

A song has captured my attention. It’s not even my style. It reminds me of “Oh Brother Where Art Thou” style of dancin’ and stompin’ or “The Beverley Hillbillies” theme song style of pickin’ and grinnin’. I’m from a different culture. But I keep listening to it because I hear an essential satisfying message that sits well in my soul.

Molly Skaggs sings, “Shame is a prison, as cool as a grave. Shame is a robber and he’s come to take my name.”  She also sings, “Love is a resurrection,” and “Love is my redeemer, lifting me up from the ground.”

Telling a person their messed up choices are going to kill them, or shame is robbing them of their potential and they need to repent and come to Jesus is like telling a mummy in a sealed tomb to unwrap themselves and step out of the sarcophagus. If you could see him, the mummy would be rolling his eyes, if he had them. He would if he could, but he is not able. He’s kind of tied up right now.

Jesus came to set the captives free and to give new life. It’s his kindness that leads us to change. The ability to change is a gift of empowering grace that comes from God’s love which is greater than our greatest weakness, the most hopeless situation we find ourselves in, or the most shameful thing we have done.

Some well-meaning Christians believe they’ve got to convince people that something is a sin so they can repent, clean up their act, and come to Jesus. John the Beloved told us Jesus didn’t come to condemn the world, but that the world, through him, might be saved. When we focus on sin we assume the sinner is unaware of his or her sin. Even a child knows the difference between right and wrong and understands regret. Only the Holy Spirit can convict us of sin without burying us deeper in condemnation.

We forget many people are coping as best they can within the limits of the size the graves of shame, hopelessness and loss of true identity restrict them to. Demanding repentance is demanding they pull themselves out of that hole. They would if they could but they are not able. Bootstrap transformation has never succeeded in the long run. This is what Paul called being dead in transgressions and sin.

But because of his great love for us, God, who is rich in mercy, made us alive with Christ even when we were dead in transgressions—it is by grace you have been saved. And God raised us up with Christ… (Ephesians 2:4-6a NIV)

Jesus went through hell for you. He said he’d rather die than live without you. So he did. Then he walked right up to the devil, and said, “I’ll take those now,” as he grabbed the keys to death and hell. He conquered death just to show how much he loves you.

Jesus said, “I died, and behold I am alive forevermore, and I have the keys of Death and Hades.” (Revelations 1:18)

He came to set the captives free – by his grace. It’s the gift of God offered to those who accept it. It’s his kindness that leads us to change.

Jesus, if you walked out of the grave I’m a-walkin’ too!

The Lord alone is our radiant hope
and we trust in him with all our hearts.
His wrap-around presence will strengthen us.

As we trust, we rejoice with an uncontained joy
flowing from Yahweh!

Let your love and steadfast kindness overshadow us
continually, for we trust and we wait upon you!

I’ve woken to the same song playing in my head for about three weeks. The Lord speaks to me through songs and I’ve learned to pay attention. (I wrote about hearing God’s voice through music here.) This phrase in particular, from a song from the seventies by Neil Sedaka, keeps repeating:  I hear laughter in the rain.

Ideas have consequences and what is in a person’s heart will eventually play out in actions. In the meantime we pray for the truth to be exposed and guard our hearts against loss of hope.

I do believe we are headed into a storm. It seems strange to be singing about joy in perilous times, yet the One who sees from a higher perspective is not in despair. In Him there is joy. Can I admit my own first reaction to that statement was, “Are you kidding me?”

Upon reflection, I realized that He is not kidding me. God is not in despair. He is full of joy.

The Prayer of St. Francis of Assisi demonstrates what it means to respond to God’s heart instead of reacting to frustration. This is coming in the opposite spirit of whatever the enemy of our souls is trying to convince us to absorb.

O Divine Master,
Grant that I may not so much seek
To be consoled as to console;
To be understood as to understand;
To be loved as to love.
For it is in giving that we receive;
It is in pardoning that we are pardoned;
And it is in dying that we are born to eternal life.

I hear the Voice of the Source of love and kindness invite me to enjoy the rainy day and walk hand in hand with the One I love. 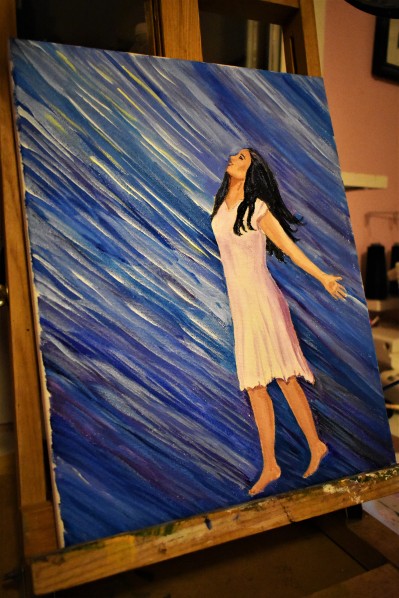 I was not expected to be born alive.

The fact that I am here at all was a miracle which I, of course, do not remember. But I remember my father’s telling of the story of my birth.

Many people die in utero. More now than ever. I’m here. Why?

As I was thinking about this, I realized that every day since the doctor, who expected to deliver a stillborn and handed my parents a healthy chubby screaming baby instead, has been a bonus.

The God of love who gave us life and sent his son to restore our relationship with him promises more than we can imagine. If every day is a gift now, how much greater is the gift of  life with him forever?

And now we have run into his heart to hide ourselves in his faithfulness. This is where we find his strength and comfort, for he empowers us to seize what has already been established ahead of time—an unshakeable hope! We have this certain hope like a strong, unbreakable anchor holding our souls to God himself. Our anchor of hope is fastened to the mercy seat which sits in the heavenly realm beyond the sacred threshold, and where Jesus, our forerunner, has gone in before us. 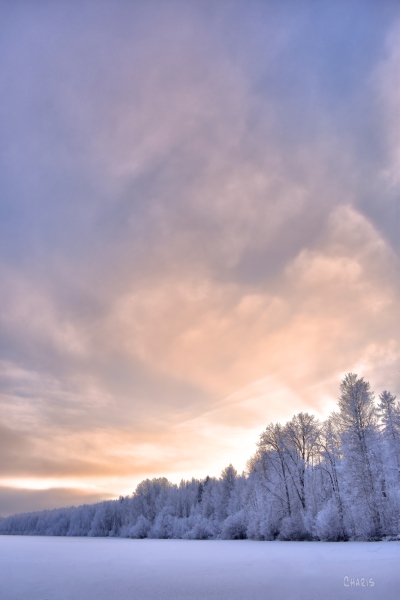 My heart, O God, is quiet and confident.
Now I can sing with passion your wonderful praises!

Awake, O my soul, with the music of his splendor-song!
Arise, my soul, and sing his praises!
My worship will awaken the dawn,
greeting the daybreak with my songs of praise!

Wherever I go I will thank you, my God.
Among all the nations they will hear my praise songs to you.

Your love is so extravagant it reaches to the heavens,
Your faithfulness so astonishing it stretches to the sky!

Lord God, be exalted as you soar throughout the heavens.
May your shining glory be shown in the skies!
Let it be seen high above all the earth!

One of the hardest challenges some of us face is forgiving ourselves. When we can’t forgive ourselves it’s hard to imagine that our heavenly Father does.

I should know better by now. I feel the urgency of the hour. Time becomes more precious, yet easier to waste as I grow older. I give in to self-pity. Negative thinking inevitably leads to conclusions that leave God’s extravagant love out of the picture and end up in a vortex of catastrophic projections.

I hear his voice gently whispering, “You! Eyes here. Look at me! My strength is made perfect in weakness. My strength, not yours. Your weakness, not mine. I’ve got this.”

I see the morning light in a corner of the sky.

“I forgive you. Now forgive yourself and let’s start again. It’s a new day and I love you. Do you hear me? I really, really love you.”

Thank you. I trust you, Lord.

Morning by morning new mercies I see. All I have needed your hand has provided. Great is your faithfulness, Lord, unto me.