I still had some flowers in the garden on Sunday, but by Wednesday the blossoms bowed under the snow — frozen solid. I hate to see the flowers die. I grieve for them every autumn.

My granddaughter, a few weeks before her fourth birthday, made a profound observation about the flowers dying. It was profound, because only a few weeks later her Daddy lay dying. 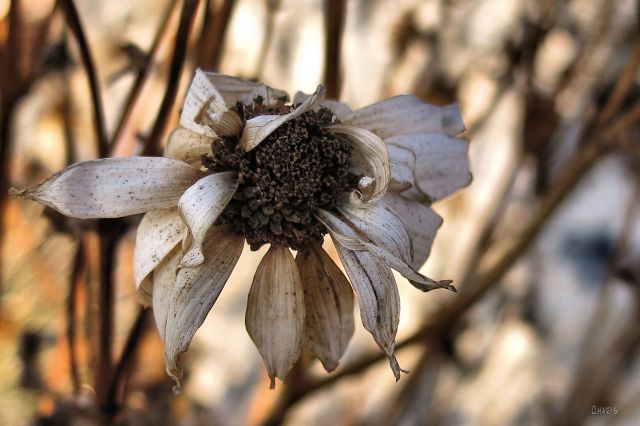 This is what her Mommy wrote:

Every time I left Bruce, I felt like I left half of me at the hospital. It felt wrong to leave him, like my being there would somehow make all the difference, but every time I was at the hospital, I felt like I should be at home with my children, making life feel as normal as possible, playing and laughing so they wouldn’t have to be worried about Daddy. No matter where I was, I didn’t feel like I was in the right place…

My kids never knew the severity of what was going on. At two months, two-and-a-half years, and barely four years old, I didn’t think it would be good for them to know that Daddy could die.

I recalled a conversation Keziah and I had shared not long after baby Vivia was born. A warm chinook wind had peeled back the blanket of snow in the park, and we were able to get outside for a little stroll. As we walked past an old flower bed, she looked up at me and said, “We don’t know what it feels like to be dead. That’s a’cause we’ve never been dead before so we don’t know how it feels.”

She looked at me for agreement. I nodded.

She paused and thought about it for a few minutes, while shuffling her heavy winter boots down the sidewalk.

“But maybe we could ask the flowers a’cause they die every winter so they know how it feels…Too bad they don’t have mouths, or they would prolly tell us!”

12 thoughts on “We Could Ask the Flowers”