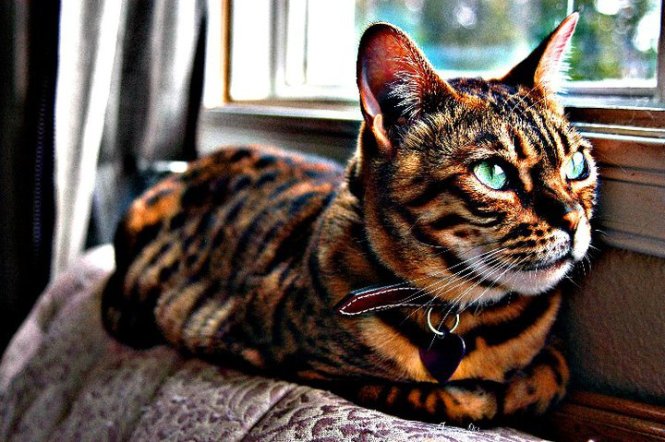 This morning I read in Romans about how God used Pharoah. It says God actually raised Pharoah up to that position for a reason. I wonder if God allowed a megalomaniac to rise to a position of power because it was time for a public show-down with a human who actually believed he was in charge. God told Moses what to do and what to say, then added, “Oh, by the way, Pharoah won’t listen.” Moe probably felt like middle management.

Pharoah refused to change because he refused to learn. He arrived at the point of contact with Moses and Aaron in a state of being incapable of changing his mind.

It just so happens this cat in the photo is named Ramses, after a Pharoah of Egypt. He is an exceptional cat because he does play fetch — with an alarmingly realistic replica of a dead mouse — but he deigns to participate in this exchange with us mere humans on his own terms and in accordance to his mood swings only. He performs for no man.

His demeanor reminds me of people who consider themselves to be experts in all fields which matter. If they are not experts in a particular field, it is because that area, in their opinion, is not of importance.

Like most cats, Ramses is not known for his eagerness to learn new tricks. (Can you tell I’m a dog person –although I admit a certain admiration for his regal bearing and alluring appearance.)

The Bengal breed is beautiful. Their markings remind us they are not that far removed from the wild. They are gorgeous animals and tend to be more aloof than the typical house cat, but like most cats they are not compliant. They are not meek. Woe betide if breakfast is late.

I don’t think , when meekness is mentioned as a positive character trait in the Bible, that it refers to a doormat, a milk toast, or a namby pamby, wishy washy victim. I think it refers to a person who humbly admits he or she is not an expert, but is confidant in her or his potential and knows she or he is capable of learning.

I love this description of meekness. A meek person knows how to lose nobly at chess. He does not distract his opponent and tip the board or demand best of three or twenty-three or a hundred twenty-three grudge matches. When confronted with a check he lays down his queen and says, “You are better than I am, but I can learn. Teach me.”

Don’t mistake meekness for mildness or timidity. True meekness is unswervingly honest, ferociously courageous and undauntedly thorough. Meek people are never resigned to hopeless stagnation in mental, emotional or spiritual slavery. They realize that gain comes through the willingness to let go of  lies which have remained unexamined for too long.

A lack of meekness was the central weakness in Pharoah’s character. He was the victim of an attitude that was not teach-able.  It was an arrogant attitude that mistook stubbornness for perseverance. I believe the attitude developed as his own original choice, but after it became entrenched, God chose to exploit it, and hardened his heart further. Only God knows at what point some people’s rebellion solidifies into unmovable arrogance. Not my job. Not going there.

My job is to remain soft-hearted, malleable, willing to admit ignorance, and to be confidant that I am capable of learning — meek. My job is to be honest about my weakness and co-operate in the mind renewing process.

But his reply has been, “My grace is enough for you: for where there is weakness, my power is shown the more completely.” Therefore, I have cheerfully made up my mind to be proud of my weaknesses, because they mean a deeper experience of the power of Christ. I can even enjoy weaknesses, suffering, privations, persecutions and difficulties for Christ’s sake. For my very weakness makes me strong in him. 2 Corinthians 12:9, 10

13 thoughts on “The meek shall inherit”