“Well,” she said, standing in the middle of a pile of what we might call reduced circumstances, “I guess this is my new normal.”

My friend was too tired to fight the injustice that brought her to this place. In a way she accepted it as her lot in life, as a fulfillment of predictions spoken over her in the past. Teachers, social workers, and bosses didn’t always wait to be out of ear shot before they said things like, “She’ll never amount to much,” or “What do you expect from someone with her background?”

I tried to encourage her, but My words slipped past her ears as if she assumed they were meant for someone else, someone more worthy of love and respect. She shrugged and went back to unpacking her baggage.

I was thinking about the word “normal” yesterday. Her normal. My normal. God’s normal. How does our acceptance of limited expectations become normal? What if we have glimpses of possibilities that are beyond past experiences? Does seeing potential wreck our concept of normal?

Yesterday I was lying in bed exchanging text messages with my eight-year old granddaughter who is currently with her family in Africa. I wondered what my grandmother would have thought if she had seen this possibility when I was an eight-year old. A phone with no wires, that could send and receive voices, text, photos, and even video of a new house on the other side of the world in a few seconds? Impossible!

In an old trunk I’ve stored a letter my grandmother received from her mother in Ontario. Grandma’s child had died tragically in Saskatchewan. Her mother’s written words arrived weeks after the funeral. In comparison, my granddaughter was telling me about her new surroundings and their arduous two day trip from western Canada to South Africa. On the same day. As she ate breakfast. I love listening to her.

Then my wifi cut out.

We have been having problems with it lately because of the floods. I felt angry and frustrated with such unreliable service – a service that has only been available to me since I acquired a cell phone. It’s not that I feel entitled to a method of communication we never dreamed of when I was a child, it’s that I feel disappointed by the loss of a means of communication I now know exists. My sense of normal has been changed by knowledge of a device that only existed in the future of the girl I was when I talked to my grandmother as I wrapped myself in the cord attached to the telephone in the hallway. She never even dreamed of such a thing as she told me about how she used to send letters to her mother in a cabin in the bush thirty miles from the nearest road. “Normal” changes with visions of possibilities.

I was thinking about this when a line from a song began playing in my head. The song, as is often the case with songs God uses to communicate with me, came out of the blue and was one I haven’t heard in years. The line that kept repeating was, “Promises, promises, My kind of promises…”

I wasn’t expecting a rush of these memories. Some of these “promises” I walked out on years ago. Some still sting.

I had to ask, “What are Your promises, Lord? What do you see instead? What possibilities do you want to show me that change my sense of ‘normal?’”

He is changing me. He is replacing old expectations of limits with new possibilities. He is saying, “Believe this and not this.”

So much of this journey is about learning to let go, to unlearn, to press on in the absence of the familiar, to absorb and be infused with the “insteads” that Jesus announced when he read his mandate aloud to a people living in resigned disappointment. From Isaiah 63:

The Spirit of the Sovereign Lord is on me,
because the Lord has anointed me
to proclaim good news to the poor.
He has sent me to bind up the brokenhearted,
to proclaim freedom for the captives
and release from darkness for the prisoners,
to proclaim the year of the Lord’s favor
and the day of vengeance of our God,
to comfort all who mourn,
and provide for those who grieve in Zion—
to bestow on them a crown of beauty
instead of ashes,
the oil of joy
instead of mourning,
and a garment of praise
instead of a spirit of despair.
They will be called oaks of righteousness,
a planting of the Lord
for the display of his splendor.

Who does Jesus say you are? What are the promises he has spoken over you? What  possibilities is he showing you that you never dreamed of before?

Ask him about your new normal. He loves that question. 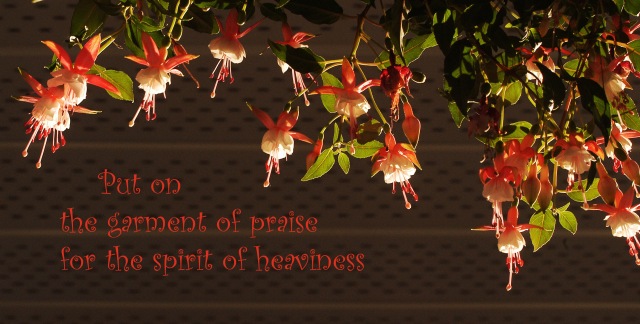 2 thoughts on “Promises, Promises, My Kind of Promises”