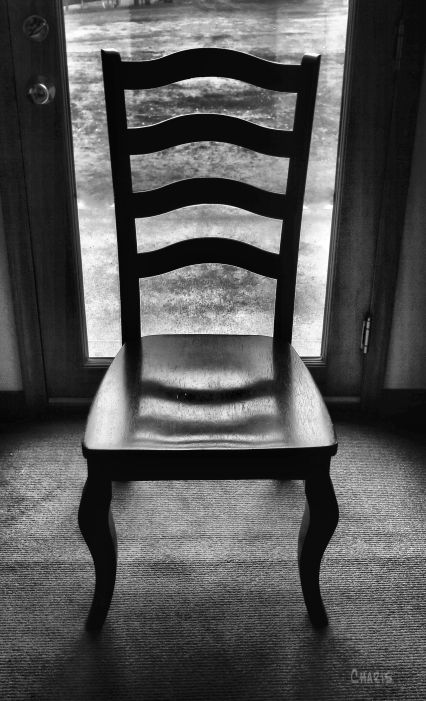 For some reason this chair in front of a windowed door caught my eye. I snapped a photo of it and continued on my way. Later, when I was experimenting with editing dud pics and wondered what it would look like in black and white I heard this phrase in my spirit.

Nor sit in the seat of scoffers.

This is from the first verse in the book of Psalms: How blessed is the man who does not walk in the counsel of the wicked, nor stand in the path of sinners, nor sit in the seat of scoffers.

Other translations call scoffers mockers, deriders, the scornful. People who are familiar with the internet call them trolls.

I’ve been thinking about scoffers and the temptation to sit in that seat. How many of us no longer read comments on news sites or have ceased joining discussions in formerly interesting groups because scoffers have entrenched themselves there? Scoffers block the way to greater insight the way the troll in the childrens story blocked the three billy goats from reaching greener fields. Scoffers don’t move. They sit.

Mocking, scornful deriders have been around for a long time, and they sit in the middle of many pathways. Sometimes you don’t realize you have been dealing with scoffer until they are gone. It’s like the moment when someone shuts off the persistent background noise of a loud fan. Peace. During their rare absences quarrelling, abuse, strife, doubt and dishonour leave with them – until someone else decides to sit in their chair. Sometimes that empty chair is hard to resist.

The book of Proverbs has a lot to say about the scornful.
He who corrects a scoffer gets dishonour for himself,
And he who reproves a wicked man gets insults for himself.
Do not reprove a scoffer, or he will hate you.

A scoffer presents as someone seeking wisdom but who can’t recognize it when it is plainly demonstrated to him or her because arrogance blocks their own view. Arrogance is the inability to esteem others more highly than yourself. A mocker has no grace for anyone not up to their standards and will miss the wisdom of children and folks of lower status.

My brother and I were only a year apart. Teachers in our junior high school loved his class and hated mine. His class had natural leaders (my brother was one) with a great sense of humour and sense of comaraderie that honoured classmates. Our class was greatly influenced by two extremely intelligent, but rather bitter scoffers. From the first day they so intimated the other students (I was labeled “hairy arms” by one of them) that we felt we needed their approval before cooperating with any project a teacher suggested. They rarely gave it. Secretly many of us envied their power and wanted to be like them. For three years we turned into an entire class of cross-armed witty, but nasty, skeptics who dared the teachers to engage our enthusiasm. Scorn is contagious.

To make things worse one year our home room teacher announced a seating plan based on academic merit. Every month we all knew exactly how we ranked when he re-assigned numbered desks. Those two boys never lost their seats in the first row. The teacher actually joined them in his derision of the last row. He believed he could shame the “low” achievers (who were in a class for gifted students) into trying harder, and that “healthy competition” would stir them on to greater things.

It didn’t work. For a couple of students the results of this experiment were tragic. Not all gifts can be measured by percentages on a test. Names stick.

I found scoffers entrenched in universities as well. One would think that in an environment dedicated to learning that new ideas and daring research would be highly honoured. Many discouraged potential PhD candidates and their supervisors can tell you how often a project is dismissed by a scoffer with power who sits in front of the door.

I’m not surprised by scoffers and mockers of those who believe in God or Jesus Christ. It’s a lifestyle. What surprises me is the number of scoffers who identify as believers. Now I’m not holding up naivety or gullibility as virtues; good questions lead to knowledge and wisdom. If you have a hole in your boat or those jeans really do advertise that your backside looks like a barn door you need to know. But some questions don’t lead to answers. Some questions are only meant to mock and deride and discourage and stop folks who want to press on.

Paul quoted the Old Testament prophet Habakkuk when he spoke in the synagogue at Pisidian Antioch. “Behold, you scoffers, and marvel, and perish; for I am accomplishing a work in your days, A work which you will never believe, though someone should describe it to you.’” (Acts 13:41.)

I’ve met people in churches who insist there is no proof that God still does miracles today. When provided with documentation they dismiss it or ignore it. Scoffing makes it hard to believe. Scoffing entrenches disbelief because the scornful cannot give up the power of the scoffer’s seat and turn to see the light shining behind them.

I was about to finish up this essay when I heard the Lord say in my spirit, “You’re still in the scoffer’s seat yourself, you know.”

“What? How so?”
“Why do you find it so hard to believe what I’ve told you about the way I see you, about your identity in Christ?”

I’ve been struggling with writing a short bio for a project I am joining. It’s sometimes easier to ask someone else to write these things because it does stir up the scoffer’s stopper question,”Who do you think you are anyway?”

Change is hard, but it’s time to kick the scoffer out of her chair and open that glass door by faith. Here goes.

Lord, I am no longer a hungry caterpillar crawling on my belly. I am a butterfly who is learning what wings can do.

I am, like Snow White, one who appeared to be dead, now raised to new life by the kiss of the Prince of Peace. I can do all things through Christ who strengthens me.

I am learning about the power of love because you love me.

And by Your grace I am still subject to change.

4 thoughts on “Nor Sit in the Seat of Scoffers”