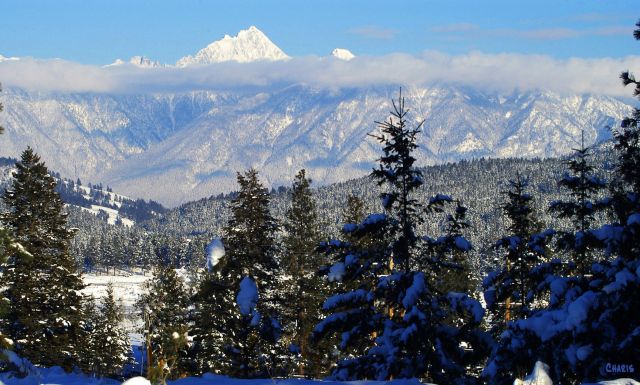 I love the valley we live in. Snow, clouds, and sun continually change the texture and colour of the mountains. I drove my old Saskatchewan farmer uncle up to a viewpoint expecting him to admire the vista as much as I do.

“It’s okay,” he grunted, ” but those mountains kinda block the view.”

To him beauty was a thin band of waving wheat domed by an enormous sky. I suppose mountains could look like giant rocks that would impede the progress of a plow. His eyes feasted on open space.

My eyes feast on rivers, lakes, trees and mountains.  I particularly like being surprised by the mountains. The other day they suddenly emerged after hiding in a moody dark cloak of cloud all week. A fresh fall of snow glowed in the morning sun. The beauty kind of took my breath away and I pointed them out to another person in the parking lot.

“Too bad the telephone wires ruin the view,” he said.

I was so enthralled with the light I hadn’t noticed the poles and wires. Nothing was “ruined” for me. If I was taking a photo I probably would have moved to change my perspective -maybe to a spot right under the wires. At that moment I was not focusing on telephone poles. I could still see beauty. 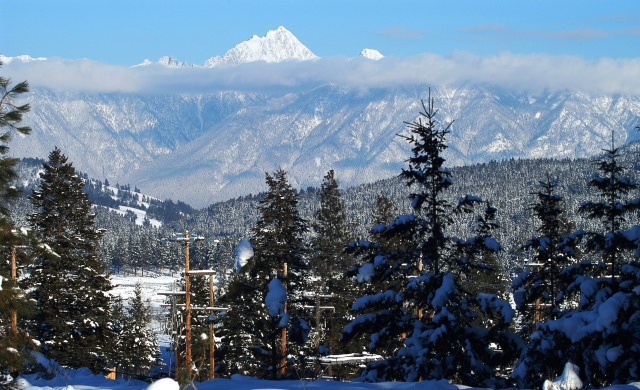 Facts can be like annoying telephone wires that keep us from seeing a bigger truth. Have you ever been in the middle of sharing a really good anecdote to illustrate your point when someone interrupts with facts?

“No. It was a Thursday and she was the niece of the Schufflemeier boy with the plate in his head, not his cousin.”

Clouds sailing to Alberta on the high westerly winds sometimes look like they snag on the Rockies on the way to the waving wheat fields. They can stay there for hours. I think some people’s minds snag on facts like the clouds snag on the craggy peaks and they miss the beauty of both the mountains and the prairies.

My stories are not always accurate for detail -although I am trying to be more respectful of  those who need documentation. Fiction can speak truth more plainly than court evidence. And honestly? A lot of my photos are photoshopped because I am trying to communicate the truth I see. I take out the telephone wires -unless it’s a comment on the shape of sunlit frosted wire garlands, which can be kind of cool. So you can correct me if you were there and remember it differently, but I’ll probably ignore you like I ignore the telephone wires.

5 thoughts on “When facts get in the way of truth”