I was sitting at my computer, performing some boring task like deleting old emails, when I heard this word in my head: CAMBIUM LAYER.

Well, that was weird. I ignored it.

A little later I heard it again. CAMBIUM LAYER. It was quite clear. I hadn’t run into that word since biology class nmpfm years ago.

Sometimes God talks to me (and no the TV doesn’t talk to me and I don’t wear a foil hat.) I’ve only recently stopped apologizing for it. If that upsets you, just move along. This is not the post you are looking for.

I think He talks to a lot of people, but when we ignore the message, or dismiss His still small voice as stress or too much pizza, He stops talking to us that way and moves on to plan B. This time I knew it wasn’t pizza talking. I’m allergic to pizza –both crust and cheese. Haven’t eaten it in years.

But like Peter, the devil has lied to me, and although I’m getting better at telling the voices, dreams, and loud thoughts that seem to come out of nowhere apart, nevertheless it is wise to judge this offering with the spiritual discernment God has given you and check to see if it lines up with scripture.

I answered this word with my usual deeply reverential response.

I was surprised to read a footnote in my study Bible. In 1 Corinthians 13 (yes, the love chapter)  a Greek word used in the verse about seeing  “through a glass darkly “ is ainigma (enigma). My margin notes said, “As in a riddle”.  J.B, Phillips translates it: At present we are men looking at puzzling reflections in a mirror.

I consulted a Koine Greek expert and he said the word implies a puzzle that needs to be pursued and is worthy of study. So I pursued, puzzled and studied “cambium layer.”

The cambium layer is the new growth layer of a tree. It carries the sap to the leaves, flowers and fruit. The cambium layer, when its season is done, forms another ring which is added to the wood of the trunk and branches.

A few days later I had an urge to take my camera to my friend’s orchard. Their orchard is quite unique; this friend’s specialty is growing as many varieties of apples as space and our climate will permit. He preserves old varieties of apples as well as experimenting with new hybrids. “Jake” has one tree with six varieties of apples growing on the same tree. He showed me how he grafts them in. All his trees are grafted onto old hardy roots that have proven ability to withstand Canadian winters.

“When I graft in a new branch I cut down to the cambium layer in the trunk or in a thick branch.” He said.

“Cambium layer, you say?” He had my attention.

“Yes. The new branch must form a connection to the growth layer or it won’t receive any sap and will starve.”

I leaned in for a better look. Some grafted branches looked like sprained ankles, strangely swollen, protruding at odd angles and supported by what looked like bandages and even crutch-like sticks which held up them up.

“It’s tricky,” he said. “If you put it in too deeply, into the old wood, the graft will fail to take. If it’s not deep enough the bark won’t form enough scar tissue around it to hold it in.”

“Tell me more about the cambium layer,” I said.

“You can make quite a few cuts into the cambium layer. Even a huge long gash will heal, but you can’t restrict it horizontally all the way around the trunk.  If you bind wire around it, for example, the tree will die.”

He fingers rested on the trunk almost affectionately.

“That’s also the part of the tree bugs want to get into. The bark is what protects the growth layer from attack. It needs to present a unified front.”

“It’s interesting,” he added, “that in tough years, or really dry years, the rings left in the tree are thinner, but a number of dense rings will make the tree stronger. You can’t always tell by looking at the size how much fruit a tree will produce. Some of these little ones can give you a ton of apples. And of course we need to be out there every year to prune back to just the essential branches to direct the tree’s energy into making fruit.”

I went away praying, “So, Lord, what are you showing me?”

This is what I feel I learned:

An apple tree can be a picture of the Church. The big C Church –the real Church made up of all followers of Jesus Christ — not just the buildings where folks plop their weary bones on a pew after the cows are milked on Sunday morning (the historical reason behind why most churches meet at the time they do.)

I have observed areas of active growth in the Church, where people are encountering God in all his goodness, being filled with the knowledge they are loved, and having an increasing desire to glorify him and to reach out to the needy with the good news. It’s a place where new believers are drawn to Christ, where there is a hunger and thirst to know him more deeply and a desire to go beyond the experience of parent’s and grandparent’s comfortable pews, and where lovers of Jesus are being empowered to be a positive influence that brings justice and salvation and healing to the suffering. These are places where lives are changing and the fruit of the spirit is beginning to fill out. 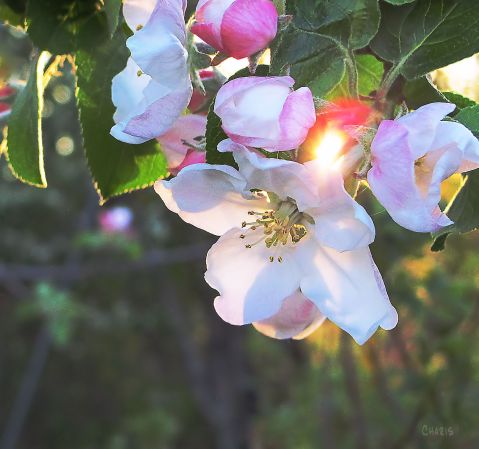 There is also a tendency for a lot of these groups, who are experiencing bounding spiritual growth, to become objects of harsh criticism and to feel restricted by the limits of “old wine skins”. They often end up disassociating themselves from former movements.

Every week new denominations start up with creative names reflecting the facet of the God-experience which best expresses their current focus. (In my opinion even “non-denominational” churches and home churches are mini-denominations. Within two or three generations, open-armed fellowships, meant to embrace like-minded people, have a tendency to morph into closed institutions whose function is to exclude those who have not had the same experience, or do not agree on every point.) They miss the stability that can only come about through years of weathering storms and drought and winter wind. Their roots are shallow and they quickly become victims of the climate.

If the growth layer in a tree is restricted the tree will die. If the old established “organized” tree attempts to restrict the growth of a movement to the parameters of its own previous experience, it will kill the tree. Tradition and history remind us to remember the goodness of God’s faithfulness, to encourage faith in what the Lord will do and not just in what he has done. By establishing sound doctrine based on the Word of God year after year, and pruning back unproductive offshoots, our forefathers and foremothers have maintained the shape and integrity of the church. I’m not saying we should overlook unscriptural teaching; essential doctrine is essential. Yes, sometimes it has run seriously wild, but God sends reformers along every once in a while to dig around the roots, lop off dead branches, kill the insects, and dump a load of fertilizer on it, to keep it in check.

The point of the solid structure of the tree is to support new growth that will produce fruit. Power-hungry jealousy and competitiveness is like a wire tied around the trunk that chokes off life. It is not the job of the cambium layer to support the woody layers. Young believers cannot be grafted into old wood with which they can make no connection. If communication fails, they will not receive adequate nurturing; they will shrivel up and fall away.

I wonder if the bark might represent the ones who are called to intercede, or the forerunners – the cutting edge spiritual warriors who bear the scars, the ones who face threats and are willing to lay down their lives to protect both the old stable wood, the new growth layer, and to gather around new grafts to support them securely. Without them, the whole tree is vulnerable to attack and can be destroyed by one annoying, invading insect at a time. 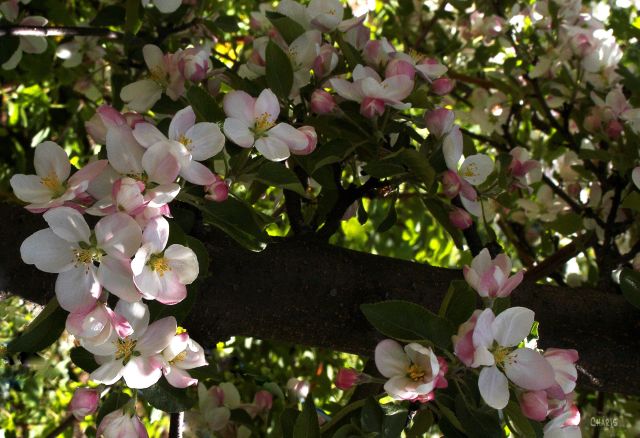 The roots of my friend’s trees are hardy. We are rooted and grounded in the love of Christ and build on a foundation of the apostles and prophets.

In Ephesians 2 we read: 13 But now in Christ Jesus you who once were far off have been brought near by the blood of Christ. 14 For he himself is our peace, who has made us both one and has broken down in his flesh the dividing wall of hostility 15 by abolishing the law of commandments expressed in ordinances, that he might create in himself one new man in place of the two, so making peace, 16 and might reconcile us both to God in one body through the cross, thereby killing the hostility. 17 And he came and preached peace to you who were far off and peace to those who were near. 18 For through him we both have access in one Spirit to the Father. 19 So then you are no longer strangers and aliens, but you are fellow citizens with the saints and members of the household of God, 20 built on the foundation of the apostles and prophets, Christ Jesus himself being the cornerstone, 21  in whom the whole structure, being joined together, grows into a holy temple in the Lord. 22 In him you also are being built together into a dwelling place for God by the Spirit.

By faith we sink our roots deep into the love of Christ and Holy Spirit flows up producing fruit that is obvious to the world –love, joy, peace, patience, kindness, goodness , faithfulness, gentleness and self-control .

A tree with many varieties of branches grafted in will not produce fruit which all looks and tastes totally alike. Cultural differences may make this tree church look odd,  lacking in homogeneity. Accepting new branches may involve an uncomfortable period of wounding to make room –but it is a wonderful thing, this Church universal.

Without the new growth layer and connections to where the Holy Spirit is flowing now, the old woody layer is a merely a dying monument to the past. Without clinging to the stability gained through perseverance and enduring hope grown throughout a 2000 year old history of good seasons and tough seasons, the strength and stability secured through adversity and persecution is not available to the new layer; it flips and flops all over the place, tossed about by every wave of doctrine. With both it is strong, and continues to grow stronger producing enough fruit to feed a hungry world.

Honour your father and mother. Do not quench the Spirit. Both.

We need each other. Jesus said, “By this shall all men know that you are my disciples -that you have love for one another.”