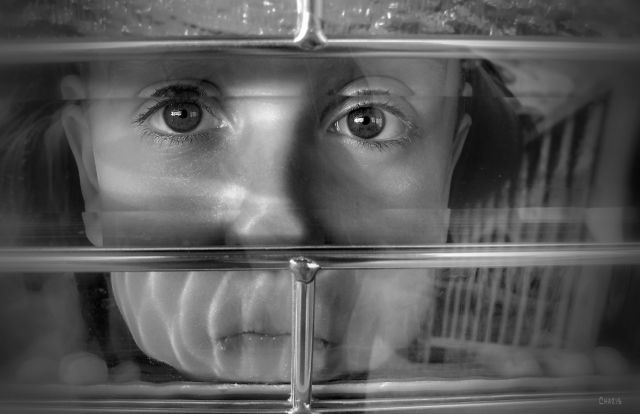 This shocked me. I read a story about young women in Mauritania who were force fed to make them fat and thus more attractive to potential husbands. Apparently in that culture silvery stretch marks are particularly appealing.

None of the comments posted below the article were from people who were a part of nomadic Mauritanian culture. Outrage flowed from the keyboards of those who saw the situation from behind their own particular cultural lens. They did not have a grid that allowed for another perspective.

“How could that possibly be attractive?”
“It’s unhealthy!”

As a person who has striven to fit my body into my culture’s definition of beauty – to the point of damaging my health in a desperate effort to appear healthy, and now being cognizant of the irony of that effort – I see it differently. I’ve seen how my own culture’s lens distorts the way we treat others when they don’t fit arbitrary standards. Maintaining one’s own perspective (“our way of life”) can seem so important to us that anyone who even questions its validity can trigger angst and anger.

Another article I read provoked the same angry reaction in readers. Published medical studies seem to show that thin people do not live longer than mild to moderately plump people (based on BMI.) In fact chubbies might have the edge in the mortality game. The shared post brought out the same angry reactions in readers. One said fatness demonstrated lack of self-control and others added the “just” clause. The just clause starts with the word just and finishes with whatever eating/exercise discipline the writers assume will correct other people’s weight problems, regardless of differences in physiology and metabolism. Several commenters (ignoring the work of qualified medical researchers) concluded that the study must be wrong because, “It’s unhealthy!”

Some said, in their own words, “If you don’t heap shame on folks for not living up to standards you will be giving them permission to sin!”

Where have we heard that before? The acceptable body shape that constitutes attractiveness is merely one example of our inability to see beyond the boundaries of our own paradigm without distortion.

I’m using the weight topic as an example because many of us in North American society have an emotional investment in it. Our obsession with food, whether joyfully eating it or pointedly not eating it, takes up a great deal of our time and attention and even our money. Whatever we choose to invest heavily in can reveal where our treasure is.

I don’t actually want to talk about weight so please don’t 1) advise which diet/exercise method worked for you and should work for me if I just try harder or 2) feel you need to tell me how long and hard you have struggled without resolution because 1) I’m not listening anymore or 2) I believe you.

The issue I actually want to talk about is seeing past our familiar cultural borders and instead learning to see through Jesus’ lens.

The little fellow in the photo looking at me through a bevelled and rippled glass door is actually an exceptionally good-looking cheerful kid (by my culture’s standards.) It’s the glass grid that makes him look like a morose oddity. His view of me was also warped. We have enough trouble seeing our close neighbour without adding our own judgments of normal/abnormal, let alone seeing people in other countries or times clearly. We also forget that when we read the Bible we are viewing words spoken and actions taken in another culture through our own beveled, rippled grid.

When we neglect to consider cultural context we can misread the message. Can we who live in a culture that has officially banned slavery and regards its re-appearance in the world as an evil practice understand what it was like to live in a place where people knew no other way? When Paul was inspired to write Ephesians 6 was he telling us that we ought to maintain the economy with slave labour or was he giving an insight into how relationships work when mutual respect is present? Which culture needs to be maintained, the culture of ancient Ephesus or the culture of honour?

John, one of the zealous brothers Jesus nicknamed “the sons of thunder” experienced a major shift in his own cultural paradigm. There was a time, after he returned from his first amazingly successful short-term missions trip, that he was full of himself. He had seen the demonstration of the power of the kingdom Jesus talked about flowing through his own hands. Heady stuff. In his world it was normal to expect God to smite people with punishment for not following the worship rules properly. John and his brother offered to defend Jesus with their own version of correction.

“Do you want us to call down fire on them, Lord?” they asked when passing a village that refused the Lord welcome.

“You know not what kingdom you are of,” Jesus answered. In other words, no. That is not the way things work in his kingdom.

Jesus was about to change their culture. The world would never be the same. After Jesus’ death and resurrection and the arrival of the Holy Spirit in power, John was transformed into a new man living in a new world. It wasn’t about obeying a complicated list of rules anymore. It was about living by one rule: love. This was a shocking message in a culture built on fear of punishment and the right of revenge. So shocking was this extension of the law of love that the man who later became known as the Apostle Paul set out to crush this new culture – with punishment, of course. Saul/Paul also became a changed man when he met the God of love who wanted to adopt him into his family. Then he himself set out to change cultures.

In later years John wrote:
I, the elder, to you, a lady chosen by God along with her children. I truly love all of you and am confident that all who know the truth share in my love for you. The truth, which lives faithfully within all of us and will be with us for all eternity, is the basis for our abounding love. May grace, mercy, and peace from God the Father and Jesus the Anointed, the Father’s own Son, surround you and be with you always in truth and love.

I was so filled with joy to hear stories about your children walking in truth, in the very way the Father called us to live. So now, dear lady, I am asking you to live by the command that we love one another. I’m not writing to you some new commandment; it’s one we received in the beginning from our Lord. Love is defined by our obedience to His commands. This is the same command you have known about from the very beginning; you must live by it. (2 John 1-4)

What a different tone in this gentle man compared to the rash young man who wanted to bring about judgment by calling down fire from heaven. He was subject to change in the presence of Love.

I’ve been going through a painful period of stepping outside my familiar church culture for the past couple of years. It has been a time of stripping away assumptions as the Lord has prompted me to question a lot of my former choices and habits. Sometimes my actions were fine, but my motives were wrong. Sometimes the reasons were right, but the methods did not encourage or build people up.

Sometimes I have acted on things God never actually said. Somebody else told me that was what he said and I just assumed they were right. Sometimes my prayers have not been in alignment with his purposes and sometimes what I thought was self-sacrificing love was actually a form of arrogance that did not esteem others highly enough. The revelations are somewhat shocking and I often want to defend myself and slip back into the familiar comfort zone, but God’s love is relentless and he won’t let me go.

Most of all he has been showing me that until I finally understand that He is love, that He is my source and will himself meet all my needs, physical, emotional, and spiritual, I will not be able to step out from behind my own distorted glass window and see with his eyes.

It’s a journey, but he promised to be faithful to complete it, walking with me. But just so you know, I am still subject to change. And this lecture is for me.

13 thoughts on “Without Distortion”