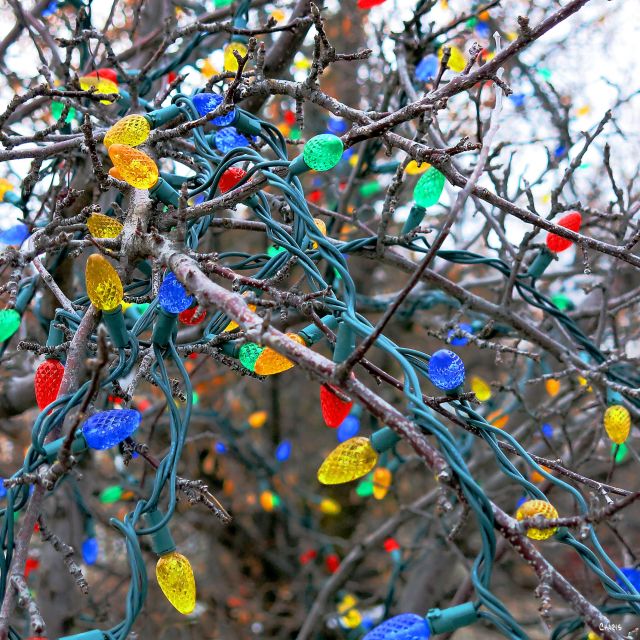 My relationship with Christmas is complicated.

I’ve been in four car accidents in my life. Two were on Christmas Eve and one was on Christmas Day. The first one left a lasting impression as a man stepped into the icy street in front of a vehicle my father was following. Neither could stop in time and drove over him. Years later I learned the investigation showed the man chose this method to commit suicide. (I wrote about it here in The Sorrow of Christmas.) I was very young, but I never bought “the magic of Christmas” after that.

On the other hand I was a singer and some of the best music in the world, especially choral music, is performed at Christmas.

On the other hand I love food. Cooking for her family and friends was how my mother expressed affection and she dished out the love at Christmas. I enjoy making cookies and Santa Claus pie with my grandchildren. Even though I can’t eat  it anymore shortbread in the oven still smells like love.

On the other hand I love art and crafts and creativity and pretty baubles that serve no purpose whatsoever other than to say “Here I am in all my sparkly Modge Podge glory.” Where’s my glue gun?

Christmas Eve at our house always included a decorated tree. It always included hot chocolate and new slippers and pajamas. Christmas Day always included an over-heated house full of relatives and the smell of roasting turkey. Aunt Jessie always brought her pineapple marshmallow whipped cream salad. Uncle Joe always piled his plate so high there ought to have been avalanche hazard warnings posted. Christmas afternoon always included a crokinole tournament for the men and a card table with bits of a thousand piece puzzle scattered on it for the women. It always included a plate of Aunt Doris’ maple fudge and a bowl of nuts still in the shell with dangerous-looking implements sticking out that little kids weren’t supposed to touch, but did. It always included a political rant or two from opinionated patriarchs-in-training.

Frantic cleaning and cranky words usually bracketed the arrival and departure of guests. That was a tradition too.

When we married and had our own home we always honoured the Christmas season script with tree and lights and presents and turkey. The season included weeks of shopping on a tight budget whilst dressed up like a sweating Eskimo in a store with yuletide carols [badly sung] piped into every aisle. (Let’s just say it’s a good thing it’s not a Canadian tradition to carry guns into Walmart or there might be one less looped tape of Santa Baby and Rockin’ Around the Christmas Tree in the office.)

Christmas included saying no to kids who saw far too many commercials on TV. It often included travelling long distances in horrid weather on icy roads. It involved little kids in emotional melt-down Christmas Day because the tradition on one side of the family said gifts must be opened at midnight. Sometimes it included cancelled flights and sleeping in airports and midnight rides on Greyhound buses because one simply did not risk breaking with tradition. Christmas frequently included Kleenex and cough drops and aspirin. Flu is also a Canadian seasonal tradition.

Christmas makes me feel emotional, but it doesn’t always bring thoughts devotional. Man-made traditions tend to accumulate and open branch offices. Don’t blame the old stodgy churches for being mired in ritual. Sometimes it takes only one repetition to create a tradition.

One thing I have learned is that you can discuss theology until the Arminian/Calvinist debate is actually settled amicably but you don’t mess with people’s traditions. Neglect to take part in the Lord’s Table for weeks and folks will hardly notice. Accidentally double book the hall for the third annual mother/daughter Christmas tea and someone may question whether your name is actually written in the Lamb’s book of life.

Christmas for me has always included stress -good stress, bad stress. Stress is the most consistent tradition. It wasn’t until the year that baby Jesus, or parts of him, went missing from the nativity scene for who knows how long (puppy?) that I noticed the disappearance of Jesus as the center of the creche looked a lot like the absence of Christ at the center of many of our traditions and rituals. I had to ask, “Is this actually “Christian?”

Tradition can be a memorial stone that helps us remember important experiences, but rituals can also become a burdens that miss the original point entirely. There is a difference between the traditions of God and the traditions of man.

Some ancient traditions started with spontaneous expressions of joy or sorrow around certain events. Jeremiah wrote songs of mourning when King Josiah died. They became traditional laments in the Jewish culture. The people in exile  inaugurated the feast of Purim to memorialize the victory told in the book of Esther. Man-made tradition and rituals can help us to remember and to teach our children. I love liturgy for the same reason. The church calendar can be like a lesson plan that reminds us to examine the whole of scripture and not merely our favourite bits. But forms without flexibility to follow the Holy Spirit’s lead can also become a burden.

Some ancient traditions are God-ordained. Moses said to the people:
“This annual festival will be a visible sign to you, like a mark branded on your hand or your forehead. Let it remind you always to recite this teaching of the Lord: ‘With a strong hand, the Lord rescued you from Egypt.” (Exodus 13:9 NLT)

The protectors of an established way of life that came from extrapolations on the law of Moses said to Jesus: “Why do your disciples disobey our age-old tradition? For they ignore our tradition of ceremonial hand washing before they eat.”

Jesus replied, “And why do you, by your traditions, violate the direct commandments of God? For instance, God says, ‘Honor your father and mother,’ and ‘Anyone who speaks disrespectfully of father or mother must be put to death.’ But you say it is all right for people to say to their parents, ‘Sorry, I can’t help you. For I have vowed to give to God what I would have given to you.’ In this way, you say they don’t need to honor their parents. And so you cancel the word of God for the sake of your own tradition. You hypocrites! Isaiah was right when he prophesied about you, for he wrote,
‘These people honor me with their lips,
but their hearts are far from me.
Their worship is a farce,
for they teach man-made ideas as commands from God.’ “(Matthew 15:2-9 NLT)

I’ve made progress in neutralizing my acid pen in the past few years, but I lost it in November. The nasty protests on social media against commercial outlets that don’t follow “Christian traditions” started up again. (Has no one noticed that holidays is just the traditional spelling of Holy Days?). There is no command in the Bible to celebrate Jesus’ birth on an arbitrary day with holly on a coffee cup or nativity scenes on city hall property. How can we demand that people who do not know the Lord honour our man-made traditions when we ignore what He actually demonstrated? How did it get to be alright to demand protection for “our way of life” when that act itself violates a command of God to love your neighbour and treat those in authority with respect?

How is it alright for our car full of Christmas traditions to run over the lonely, the depressed, the oppressed, the sick, the grieving, the desperate as we rush home to celebrate the birth of the One who showed us what love is? How is it alright to lay burdens on ourselves that resist the message that Christ came to set us free?

Jesus Himself said that if we love him we will obey His commandments which are simply to love others as we love ourselves.

I’m saying it is for freedom that Christ came to set us free and we need to be careful not to take on another yoke of bondage.

I’m saying God loved the world so much that he gave his only Son so that anyone who believes in him shall not perish but have eternal life. That is joy. That is love.

Anything else is unplugged tangled Christmas tree lights that bring no light at all.