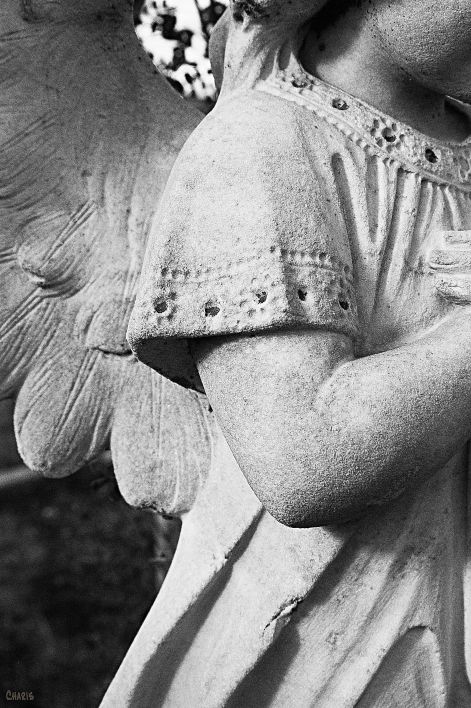 I’ve never seen an actual angel, not that I know of, at least not while I was awake. I know people who have – and some of them are the scientifically-oriented type not given to flights of fancy. I gather it’s a rather startling experience.

I’ve sung about them quite often.

Angels, help us to adore Him,

Ye behold Him face to face;

Sun and moon, bow down before Him;

Dwellers all in time and space,

Praise with us the God of grace.

(from Praise My Soul the King of Heaven by Henry Lyte)

I’ve read about them too, but like most folk the pictures of angels I’ve been acquainted with came from Christmas decorations, Baroque paintings, corner gift shops and carved stones in cemeteries.

I’ve seen them in dreams though. One leaned down low and told me a secret that explained a lot of previously unexplained events in my childhood. Another time, after I had been praying about what action to take I saw an angel pointing to the trail I often walk on when I go to pray. He was leaning on the please-clean-up-after-your-dog sign and smiling.

I have seen angels in uniform in my dreams, in battle fatigues, in air force uniforms, and one dressed as a cable guy. He was in my house repairing something in the wall where my husband and the boys had once threaded a wire that connected their computers so they could play games together. Shortly after that I noticed a definite improvement in communication in their relationships.

When I hear people’s stories of real live encounters I become envious. I have sincerely prayed for my eyes to be opened like Elisha’s servant so I could see too, but every time I have done that someone close to me sees something, and I don’t.

When our son-in-law lay dying several people told me about seeing angels around him. One praying friend in another part of the world sent a message telling me about the angel she saw in a vision. Within a few hours I heard two other people who were there at the hospital describe seeing exactly the same thing. Some people saw two very tall angels on guard duty on either side of the door to his room. Some saw angels crowded in the room and hallways. Some saw angels holding his head.

He didn’t die. He was miraculously healed.

Just before that season when the doctor thought I had cancer, then my mother-in-law was in ICU for heart problems and surgery, our son-in-law had flesh-eating disease, and our son’s family’s home and community was nearly destroyed in a flood, etc. etc. etc. I prayed to see angels. I didn’t. My husband did though. He’s really a down-to-earth guy, a scientist, but he old me excitedly the next morning that he dreamed (or he thought it was a dream) that he answered a knock on the door and a bunch of very big angels walked past him into the living room. He said they all dressed and acted like rugby players. Big tough rowdy guys.

“What did they look like?” I demanded. “Did you see their faces? Did they have names?”

“There was a whole team of giant nine-foot tall rugby player angels crammed into our little eight foot high living room! It was really hard to see anything. All I know is that they were slapping each other on the back enthusiastically like they were really looking forward to playing a big important game. They were like ‘Bring it on! We are so ready for this!’”

Maybe I haven’t seen angels because I might be so distracted I would forget to do my part in the battle, which seems a lot like pulling out little Lucy’s tiny dagger in the presence of a whole huge army of threats and ugly hatred like she did in a battle in Narnia.

The Bible talks freely about angels, and how they are servants of God. They are not made of stone or paper or cookie dough and they aren’t chubby babies with aerodynamically impossible tiny wings. We don’t worship them, but it’s good to know the angels who worship the Creator of the Universe and see him face to face help us fight the good fight. I trust the Lord sends them where he needs them – and where I need them when I pull out my little dagger.

There are more accounts of angel sightings in the book, While He Lay Dying.

5 thoughts on “Angels Help Us to Adore Him”