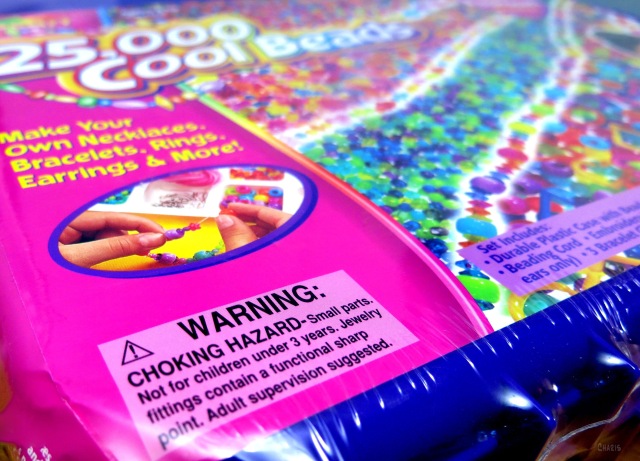 I bought my granddaughter a jewellery-making kit with 25,000 colourful beads. When I took it out to wrap for her birthday, I thought a while, then put it back in the closet and bought her something else. I was pretty sure she would like it, that was not the problem. The problem? A little sister who got into everything and sometimes put those things in her mouth. Depending on a child’s age this box contained either 25,000 pieces of potential pretty jewelry or 25,000 potential choking hazards.

I was also an eldest child. I know what it’s like to have younger kids’ needs veto mine, but I looked at my granddaughter’s harried mother and her incredibly curious toddler sister and decided to choose safety this time.

But it bugged me. It wasn’t just the memories of having to forego activities because of offendable siblings (because as a mother and grandmother I’ve done this many times without complaint); this time it triggered something else. I realized it represented another problem I am struggling with – when potential choking hazards limit older believers’ spiritual growth, when topics are kept simple to avoid offending people who are still toddlers in their spiritual growth (and I do love toddlers).

Many years ago I volunteered to help a large family. I assumed the mother must really like kids to have so many.

“Actually it’s the babies that I love,” she told me. “When they start getting independent my arms feel empty. I just adore cuddling babies. I can’t imagine home without little ones. They are so much easier to manage than teenagers. If they don’t want to move you just pick them up and move them yourself.”

I looked around. This home was completely centered on the needs of the youngest children. No potentially dangerous toys or tools and definitely no boxes of beads or junior chemistry sets. The older children were expected to look after the younger.  Some of them were remarkably responsible. But some of the teenagers were unhappy and rebellious. No one had time to encourage their individual interests and talents or listen patiently to questions that would lead to long that-depends kinds of conversations. They were set adrift to learn on their own. Some of the older kids did not fare well. They left home as soon as they could, but lacked preparation for life outside the nursery.

I realized that some church communities I have been part of could be a bit like this. When the emphasis is on producing new Christians and teaching them only to the point where they can turn around and serve the needs of the less mature, a kind of stunted growth becomes the norm for some and restlessness begins to emerge in others. Often those who fit into the niche of evangelism and service giftings are happy. Often those who tend to pose hard questions are not.

Service is a very worthwhile undertaking. The problem arises when older “children” in the family lack the opportunity to go beyond the basics, to learn about and explore everything Jesus said and the apostles taught, when they are expected to be satisfied with milk because meat is a choking hazard. They don’t develop discernment because the messy stuff and complicated stuff is kept on a high shelf in the back of the closet, or out of the house completely. The result is often apathy, vulnerability to the world’s philosophy, learned helplessness, and a whole bunch of people dependent on an overworked pastor/parent figure who is just trying to maintain a safe environment where everyone can play nicely.

The writer of Hebrews expresses it this way when trying to explain a deeper understanding of Christ-centered faith: We have much to say about this, but it is hard to make it clear to you because you no longer try to understand. In fact, though by this time you ought to be teachers, you need someone to teach you the elementary truths of God’s word all over again. You need milk, not solid food! Anyone who lives on milk, being still an infant, is not acquainted with the teaching about righteousness. But solid food is for the mature, who by constant use have trained themselves to distinguish good from evil. Therefore let us move beyond the elementary teachings about Christ and be taken forward to maturity… (Hebrew 5:11-14; 6:1 NIV)

Some of the “elementary teachings” mentioned later in this chapter are not even taught as basics in a lot of church family circles these days. More complex concepts can’t be packaged in a Sunday morning twenty-minute sermon or a week day Bible study with accompanying fill-in-the-blank, tell-me-what-the-author-thinks-verse-six-means study guides. Some questions have answers that require years-long conversations and don’t fit into blanks designed for one sentence. Not even close.

Research shows that a large category of people leaving institutional churches are the ones who have served for years. They are actually looking for more God. (A.B. Simpson called it “The Deeper Life” and in his day had to leave the established church in which he was ordained to pursue it.) These folks are not saying “I’m done with faith.” They love the Church – the body of Christ, the family of God. They are just saying,  “Hey, wait a minute. Is this the glorious church, or is there more, Lord?” They often feel torn between love for family and a drive to pursue more.

If you’re looking for an answer to the question of how to be considerate of people yearning to learn and grow to maturity as well as nurturing new believers vulnerable to choking on hazards or frightened by voices who don’t agree, I don’t  have one – only more questions: What is love? What does grace look like in a household of faith? When do we emphasize security and when do we exemplify freedom? How does honour build everyone up to become God’s temple of living stones?

All I know is that a loving family is concerned about making disciples and equipping all its members to be everything God intended them to be. And we have room to improve.