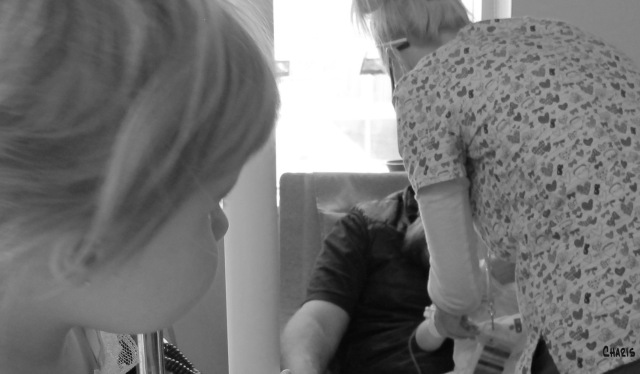 Owies hurt. They really do.

I promised myself, when I was I wee girl, I would remember that fact when I grew up. I would remember that when you are three years old and get a really good cry going over a sore finger pinched in an unforgiving door, it’s hard to suddenly stop, even when the finger isn’t as red as it was a few minutes ago. It doesn’t help when unsympathetic daddies offer amputation as a cure –even if you don’t know what amputation means. It’s even worse when somebody does tell you what it means.

It’s also hard to understand why some words can get you in trouble when you say them but don’t get grown-ups in trouble when they say them. And then there are the words you stumble upon that get you in trouble. I remember when my little brother was bugging me and I said, “Stop it, you person-who-bugs-people!” (well, not in those words) and got my mouth washed out with soap. It seemed perfectly grammatically consistent to me.

I was looking after my little granddaughter when such a situation repeated itself.  (What is it with daddies and the amputation cure?) That was also the week her brother was having his adenoids taken out.

“Are they going to amputate?” she asked in shock.

She was very worried about him, and cried on several occasions that she didn’t want him to get hurt. Little brother was born with exceptionally large adenoids that doctors overlooked because other illnesses usually cause the type of breathing problems he had, and they needed to be eliminated first. Finally someone clued into the adenoids problem and he was scheduled for surgery.

“What are adenoids, Mommy?” Daisy asked with deep concern.

“They are just little balls of tissue growing behind his nose that make it hard for him to breathe,” Mommy explained. “The doctor is going to put him to sleep and take them out. He will have a sore throat, but he will be okay in a day or two.”

At church the next week people prayed for Little Mighty Man’s up-coming surgery. Someone asked Daisy why her little brother was going into the hospital and she answered in her best speak-up voice, “He’s having his little balls amputated.”

The reaction to her simple statement of fact is one I have often encountered when speaking about God and my relationship to him. My words trigger a reaction I do not expect. I seem to have said something which carried a different meaning than I intended. Recently I quoted a verse for someone from 3 John 1:2, “I pray that you may prosper in all things and be in health, just as your soul prospers.” I thought it was a blessing.

“Prosper? Prosperity?” he said, face red and eyes a-popping, looking as if I just suggested he have his little balls amputated. “I hate the prosperity gospel! Do you realize the damage that kind of thinking causes?”

Huh? What it something I said?

I’ve written before about feeling like I am often caught in the cross-fire between different streams of Christianity. I love to feast at many tables and have learned, for the most part, that bone-spitting will be involved. Alas, in the midst of what I hope will be a demonstration of brotherly love, I keep running into the problem of communication and a tendency for partakers to take –or give– offense.

Long ago, as a singing student, I learned that each school of voice culture, and perhaps even every individual voice teacher, had their own vocabulary. One teacher kept talking about the bell in my mouth, another about full-throated ease. Until they gave a demonstration I had no idea what they meant. Since a singer can’t easily see the muscles and tissues and cartilage involved in making a good sound, the appeal to imagery often helps make the link to sensation. Teaching singing is a more physical activity than discussing spiritual things, but it still uses a lot of subjective language.  I believe many fields of interest are like this, especially social sciences and the arts, but the attempt to describe God and faith uses even more abstract terms than the arts. Every spiritually-oriented group seems to develop it’s own vocabulary and assigns different shades of meaning to the same words.

I’m finally figuring out that to the guy I upset, “prosperity gospel” means “bribery by means of false promises appealing to selfish greed.” Well, alrighty then, if that’s what he thinks it means I’m agin it too. To some the term thrown back in argument, “poverty spirit”, means “the inability to trust God to supply resources necessary for the task he assigns you.” Okay, I’m good with that. The church has a long history of watching endeavours based on faith eventually turn into endeavours based on more creative fund-raising techniques. (Personally I tend to pay attention to the experience of Paul who said he had learned the secret of being content in whatever condition he was in.) But unfortunately I don’t hear people carefully  listening to each other very often.

There are so many terms over which people engage in arguments. They frequently take a stand for or against their opponent’s viewpoint without ever clarifying what the other means. Often the arguments are on two separate tracks that will never make contact with each other because they assign straw definitions to each other’s words (a verbal asymptote for you math types). What is actually meant by terms like religion, doctrine, spirituality, judgment, grace, healing, abuse, love, the goodness of God, the filling of the Holy Spirit, worldly, heaven, hell, forgive?  I have no idea what “hate the sin and love the sinner” actually means to the people tossing it about like a volleyball amid signs that seem to focus more on the hate part. Add the problem of multiple languages and translations and words become a tangled mass of ropes ready to trip up even the brightest scholar.

My point, and I do have one, is that the language of God seems not to be primarily verbal –and is certainly not English, authorized or otherwise. John 1 says “the Word was God.” Noting our propensity for misinterpretation, God sent his son as a living being who encompassed love to show us what he was truly like.

God’s poetry, his creativity, is more than words. It is summed up in Jesus Christ who went wordlessly to the cross, and stretched out his arms in love that we might know his Father really is.

8 thoughts on “More than Words II”