Sometimes I feel like the Lord throws pebbles at my window to catch my attention. When I respond he whispers, “Come! I have something to show you!”

Sometimes I answer, “But I have work to do –blank forms, sticky floors, unmailed parcels.” 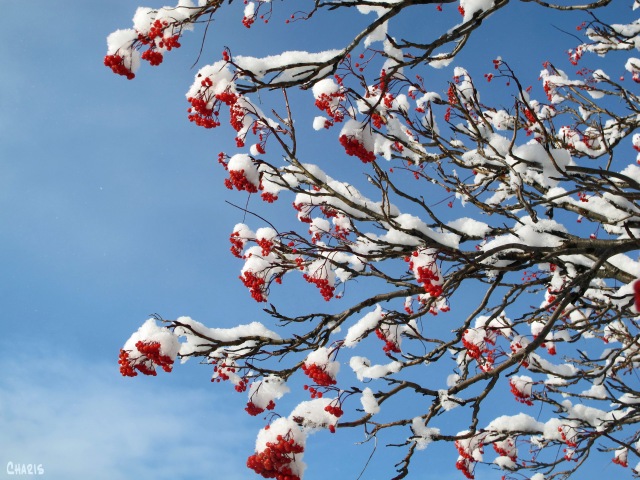 The attention grabber this time was freshly fallen snow on mountain ash berries outside my window. I grabbed my camera and went out to look. Then I followed the light and the mountain ash trees down the block to the creek. An hour later I was back at my desk with rosy cheeks and renewed joy in the goodness of Daddy God. He knows I love colour and the red berries covered with delicate pure white snow were like a sign of his goodness to me. 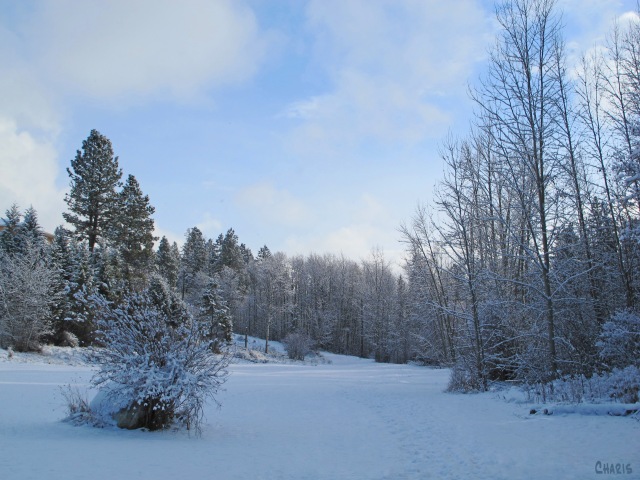 It is his goodness, his kindness, that makes me want to change.

Like a lot of people, I grew up with a God I was afraid of. I know I’m not the only one who picked up that message or the phrase the TV character, Maude, used, “God is gonna get you for that,” would not have connected with so many people.

In my culture the best thing that could happen to a person was to be “used” by God. That was an entrenched lie that took some considerable spiritual explosives to dislodge. Well, I had been “used” by humans and that was not something I looked forward to happening again, thank you very much. I understand now that the best thing that can happen is to grasp the solid bedrock granite concept that I am loved by God. Only then can I risk change.

One days, years ago, I called the children to supper. Two adorable little kids had recently joined our family as foster children. They did not come when I called. I found them hiding in the basement.

“Why didn’t you come when I called?” I asked.

The little girl said, “You put the bottle on the table.”

“That one!” she answered, pointing to a bottle of soy sauce I bought in Chinatown.

“When Grandpa puts a bottle like that on the table bad things happen!”

She covered her eyes and cried. That’s when I realized the bottle had the same size and shape as a whiskey bottle.

At first I made the mistake of trying to correct  kids who experienced hurtful things the same way as we disciplined our own children. It didn’t work because they didn’t understand that they were loved. They didn’t know that if I sent them to their rooms that they wouldn’t be locked in there for days without food. They didn’t know what safe meant.

I picked up one of our little foster guys to take him out of a public place because he was disturbing others who wanted to enjoy the show. When I reached the aisle he grabbed the last seat and hollered, “Don’t beat me!!!” (I was probably reported.) I had never beaten him nor did I have any intention of ever beating him, but he didn’t know that.

God forgive me, but my prayers for years were don’t-beat-me prayers. It must have broken his heart.

I “asked Jesus into my heart” during the Cuban missile crisis in the 60’s because I was afraid of going to hell if a nuclear bomb fell near our house, or of being “left behind” if all the people with an in with God got zapped off the planet. I didn’t need anyone to tell me how disappointing I was, how far short of the mark I fell. I certainly didn’t need a preacher telling me week after week that I needed to repent and change my ways. I needed someone to tell me how –or rather Who.

Like our foster children I needed to learn that God was good, that he would provide my needs just because he was good. I did not understand that I didn’t need to earn nurturing care by making myself useful in the church, and thus indispensable.  Yes, sometimes we had to set down firm boundaries for the kids at the start for the sake of safety (You may not stab your sister, nor yourself with a fork. You may not play on the road. We respect gravity here, and like gravity the natural consequence of defiance is consistent.) Eventually the children learned to trust that we had their interest at heart. Usually. The analogy breaks down when you are talking about sleep-deprived, nerve-jangled, insecure parents who also need to change, but most of the time we spent nights rocking them and days feeding and clothing and nursing them back to health –and playing.

So often people hear the message of Jesus Christ as “Change –or God will get you for that!” There are those who worry that if we speak of the good news, if his goodness is poured out in healing and encounters with a loving Daddy God who says it’s ok to leave work behind and go play in the snow, that we are offering a “greasy grace” that lets folks get away with unacceptable behaviour. “You’re just asking them if they want to come meet the One who just met their need. Where’s the repentance? Where’s the obedience?” they say.

Well, a lifetime of people telling me how disappointed God was with my behaviour led to my responding to correction with the same attitude I saw in a child who said, “I can’t do anything right! You think I’m just a pile of poo! I hate you! You’re not my mother and you can’t tell me what to do!” Like her, I went off and hid myself in depression and wallowed in my pooey-ness. It was the unexpected kindness of God that demonstrated he was not the same god I grew up with. He held out his hand to me.

Change happens when we see ourselves as God sees us –loveable and worthy of his care. When we trust that fact that he is, indeed, loving and has our interest at heart we can see his discipline as disciple-making, as empowering us to become who we are meant to be. His judgment is a daily assessment of what is progressing well and what needs to be worked on next. It is not meant to be vengeful punishment and condemnation.