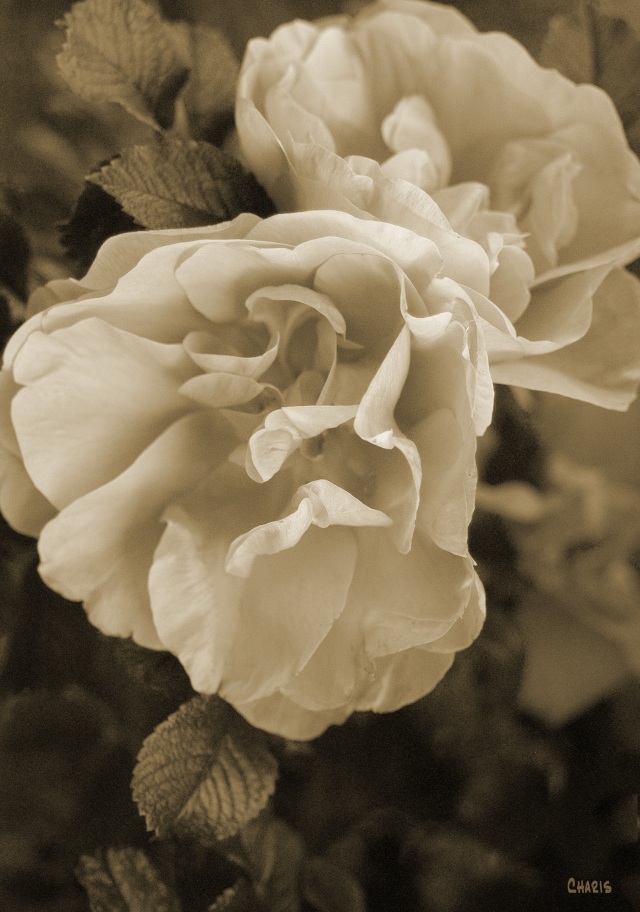 I tried my hand at my version of vintage-style photography this week. I like the juxtaposition of something new and fresh encased in a historical frame.

When I was a child I thought the second world war took place in black and white. That idea probably came from watching the old TV show about the war narrated by Walter Cronkhite- the one on Sunday afternoons that started with a big picture of the Rock of Gibraltar. Even as an adult I am surprised when I see photos of the war years in colour.

In a way, I suppose all history is written in black and white. So many colourful nuances are left out of historical accounts. What made masses of regular people believe certain ideas? Why did they choose to make the choices to follow the leaders they did? What made some cultures xenophobic or aggressive or peaceful? Who convinced some that genocide or infant sacrifice or slavery was a good idea? What was going on in the mind of an ordinary woman as she stirred the pottage, or a man as he mended a door hinge?

Historical accounts are rarely accurate, of course, since they are written by the winners and don’t take dissenter’s opinions into account. Dietrich Bonhoeffer, the German theologian who worked behind the scenes (aka a spy) to bring down a regime he saw as evil, is one example of many who opposed what was happening in his country. Current history writers (the winners) remove his traitor status, but that label hung him on the gallows in his own time.

I was on a jury that heard the testimony of thirty-two people who witnessed the same shooting. Amazingly no two versions were the same. When I read newspaper accounts  later I wondered if the reporter and I were at the same trial. His perception of what took place was so different from mine. That month was a dramatic lesson in how people’s minds screened truth. I do believe the majority of witnesses were trying to be factual (although most were seriously drunk at the scene of the crime) but I tended to believe the ones who revealed their own weaknesses, and included details about which way the door opened and not being able to see faces clearly because of back-lighting, rather than the ones who saw themselves as heroes but couldn’t remember if they drove home “after imbibing.”

History, as we are taught it, may not be fully accurate in detail, but it does teach us about patterns and cycles. We are foolish to ignore those patterns. Mark Twain said something like, “History may not repeat itself, but it rhymes.” If the people holed up in David Koresh’ compound in Waco, Texas had known the strikingly similar story of the people holed up in Munster, Westphalia in the 16th century would they have used the same tactics? Would the government sponsored assailants have repeated the same type of seige?  Has anyone noticed the  pattern in history of proclaiming a group of humans “non-persons” in the process of trying to excuse their annihilation? Historically what has happened when people are fed messages of  fear over and over? What has happened when political leaders are more relied upon for safety and provision than God? Why are people surprised when ones they hand power to, expecting them to save us, tend to usurp more power and start acting like gods? (That power corrupts must be one of the most often repeated lessons in history.)

The Bible says to teach your children their history. It includes enough details about the failings and faults of so many characters to make it quite believable to me. Bible heroes were also cowards, adulterers, drunks, thieves, slave masters, perjurers, and power-delusioned wretches like the rest of us. We can learn from them, or we can repeat the same mistakes.

The roses I photographed yesterday will be blown next week. A photo-shopped sepia memory exists, and now that I’ve posted it may be flung out into cyberspace in perpetuity. It’s not exactly how they looked (they were actually softy pink) but they are recognizable as roses –and they have taught me something.

One thought on “Memories in Sepia”