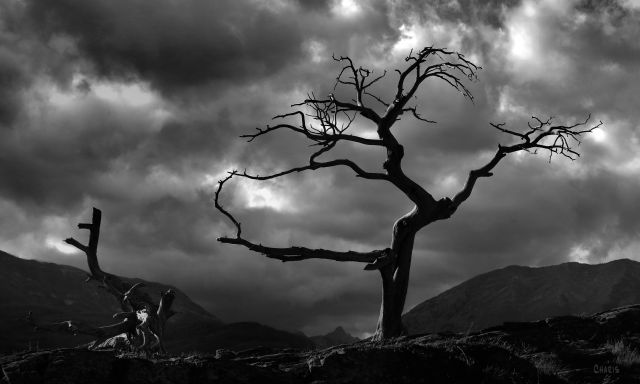 I’ve driven past the Burmis tree too many times to count but I have never stopped to photograph it before. Apparently it is the most photographed tree in Alberta. There are always vehicles pulled over near it and locals watch in amusement as tourists try to push their doors open and steady their cameras in winds that can almost knock you off your feet sometimes. I’ve never stopped or taken my camera out – just because so many other people do, and I  have to be different I guess. But this week the light was perfect, and nobody was watching, so…

Experts (who knows which ones) say it is a 600 to 750-year old limber pine. That means it could have been a sapling during the time of the last Crusades or the Black Death. It could have been bending in that wind when Kublai Khan came to power, when Dante and Chaucer were writing, when William Wallace was painting his face blue, or Marco Polo eating noodles in a Chinese take-out for the first time, or Wycliffe had just lost his teaching position for ticking off the University establishment with the crazy notion that if you are going to tell people to follow the teachings of the Bible they should at least be able to read it for themselves. I suppose the tree is worthy of attention simply for standing from then until now.

Except that it sort of blew over that time in the nineties, after it was pronounced officially dead about twenty years before. The thing is the Burmis tree is just about the only thing that the town of Burmis still has going for it, so some stalwart citizens discretely employed rods and brackets and raised it back up again. When annoying vandals (sans Huns) broke off an iconic branch they glued it back on and supported it with a rod, Jeremy Bentham-style.

Most photographers, including me, edit it back out.

Don’t get me wrong, I love history, I really do. I almost passed out from excitement when I saw the gates of Ninevah and the Rosetta Stone and the Elgin Marbles at the British museum. No beach vacation on earth could ever compare to walking the pavement of Jerusalem or hearing the crunch of pottery shards underfoot in Shiloh. But there is something about this sad-looking dead tree, reminiscent of a Dr. Seuss illustration, gathering tourists’ attention on the side of a blustery highway that makes me want to ask, “So, little tree, what have you done lately?” The tree’s claim to fame was that it had lived for such a long time. An amazingly long time actually, but now it is no longer living and I wonder if it is an homage to life or to death and its inevitability, even if one had the strength to stand strong through a thousand winter gales.

I suppose though, that all these historic figures I admire are just as dead as the Burmis tree. Well, deader actually, because they popped off their mortal coils long before the tree gave in. So many women and men of the past have demonstrated greatness and taught us profound truths, but they are gone now too. Perhaps the lesson of the tree is to simply be an example of standing in the gales of adversity, and having done all one can, to stand some more.

I pondered. Then I read this quote by E.M. Bounds (who demonstrated some standing ability himself):

“The past has not exhausted the possibilities nor the demands for doing great things for God. The church that is dependent on its past history for its miracles of power and grace is a fallen church....”

Hmmm… Perhaps that’s why the Lord drew my attention to the Burmis tree this week. The greats were not great when they started. There was a time when they were as weak as saplings. But when we look to the deep thinkers and devoted people of the past and the institutions they started more than we look to the God who longs to be active in our present, we tend to cease to see, or even believe in miracles of power and grace in our own day – or when we do we dismiss them as coincidences or “unexplained” events too good to be true.

Further down the road the fire-ravaged shell of the old Mohawk tipple in Burmis stands as a symbol of the loss of prosperity and hope in a town of people who ran out of resources. There are some vacation homes in the area, but not much else is happening in downtown Burmis these days.

The thought strikes me that it is so easy to forget Who our source is and to try to resurrect dead monuments to the past instead of pursue active encounters with God.

St. Paul, the intellectual who changed his opinion about Jesus Christ so drastically he went from killing his followers to risking his own life to bring the good news of the kingdom of God, had this to say to folks in Corinth: “When I came to you, I did not come with eloquence or human wisdom as I proclaimed to you the testimony about God. For I resolved to know nothing while I was with you except Jesus Christ and him crucified.  I came to you in weakness with great fear and trembling.  My message and my preaching were not with wise and persuasive words, but with a demonstration of the Spirit’s power,  so that your faith might not rest on human wisdom, but on God’s power.”

15 thoughts on “The Burmis Tree”