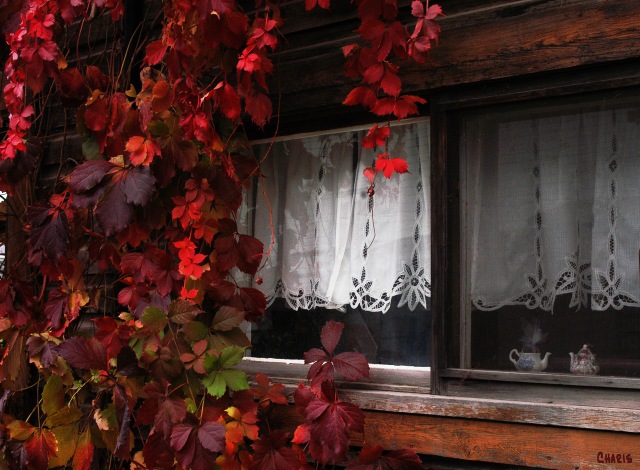 Photo: Drop by any time

Grandma sang this song. About forty of us kids would be crammed into the Cumming’s basement rumpus room for Happy Hour Bible Club after school on Thursdays. We sat cross-legged beside the mountain of jackets and snowpants that threatened to avalanche on us. Snow-soaked socks flopped off the ends of our feet in the too hot after being too cold temperature quandary that was our norm. My Grandma stood beside her flannel story board and “did the actions” to this song:

Zacchaeus was a wee little man

And a wee little man was he

He climbed up into a sycamore tree

For the Lord he wanted to see

And as the Lord came passin’ by

He looked up into that tree

And He said, “Zacchaeus, you come down!

For I’m going to your house for tea

For I’m going to your house for tea.”

I know now the last line is usually “coming to your house today” but coming to your house for tea made perfect sense to me, because on days when Grandma wasn’t teaching Happy Hour Bible Club at four o’clock on Thursdays, tea was either happening at  Mrs. Stuart’s house or Mrs. Page’s house or at her own house around a quilt stretched out on a frame in the living room.

Here’s the story as told in Luke 19 without Grandma’s creative embellishments (Zacchaeus quickly ran out and bought raisin bread and milk in her version):

Jesus entered Jericho and made his way through the town. There was a man there named Zacchaeus. He was the chief tax collector in the region, and he had become very rich. He tried to get a look at Jesus, but he was too short to see over the crowd. So he ran ahead and climbed a sycamore-fig tree beside the road, for Jesus was going to pass that way.

When Jesus came by, he looked up at Zacchaeus and called him by name. “Zacchaeus!” he said. “Quick, come down! I must be a guest in your home today.”

Zacchaeus quickly climbed down and took Jesus to his house in great excitement and joy.  But the people were displeased. “He has gone to be the guest of a notorious sinner,” they grumbled.

Meanwhile, Zacchaeus stood before the Lord and said, “I will give half my wealth to the poor, Lord, and if I have cheated people on their taxes, I will give them back four times as much!”

Jesus responded, “Salvation has come to this home today, for this man has shown himself to be a true son of Abraham. For the Son of Man came to seek and save those who are lost.”

Genuine encounters with Jesus are life-changing.

The story I heard was that tax collectors in Israel at the time were even less appreciated than tax collectors in our time. Apparently they not only collected money on behalf of highly resented foreign occupiers, but they had to “raise their own support” and frequently turned the screws to squeeze out a little more cash flow for themselves.

I used to think that Zacchaeus’ change of heart came after Jesus sat down with him at the kitchen table and gave him a good talking to, but the story in Luke says Zac made his announcement after Christ simply addressed him by name and announced he would be Zac’s guest. Jesus said he was seeking and saving the lost and that day was Zac’s day. I bet he went to Jericho specifically for that one man.

The eagerness of the tax man and his desire to see Jesus, the quick response of admitting fault, and changing his ways, tells me this man had a heart that was already softened.

May my heart be so prepared to change when Jesus calls my name.

7 thoughts on “Coming to Your House for Tea”